Mechagodzilla aka Kiryu is a robotic version of Godzilla and the villain of "Godzilla vs Mechagodzilla", and "Terror of Mechagodzilla" in the Showa series, The main military weapon of the Heisei film "Godzilla vs Mechagodzilla II", and the main hero of "Godzilla Against Mechagodzilla", and "Godzilla: Tokyo S.O.S." of the Millennium Series. This creature is created from the remains of the First Godzilla from 1954. Mechagodzilla was a weapon created after King Ghidorah was defeated, as well as Destoroyah. Mechagodzilla is the only weapon to become an anti-hero and operated by Ryuga. This creature is metallic, powerful and ready for any battle, and able to rival Bowser's Cybernetic monster, Cyber-Zilla. Mechagodzilla is armed with rocket propelled legs, missiles, lasers, a hand driller, maser, a defense shield, and an Absolute Zero Cannon. This robot is one of the most specialized machines ever created. Originally, Mechagodzilla was designed by Machinedramon as a weapon of destruction, however, after discovered by Ryuga, Mechagodzilla became a more vigilante battle machine. This robot specializes in one thing: complete service to its user and/or pilot. 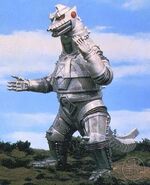 Kiryu: Mechagodzilla 3
Add a photo to this gallery

Retrieved from "https://jadensadventures.fandom.com/wiki/Mechagodzilla?oldid=261071"
Community content is available under CC-BY-SA unless otherwise noted.