Mary is the villain of the computer game Ib, & is a painting done Guertena, his last painting before he died. Mary was all alone in her sereal world of paintings, all she had was her artwork. After Ib, Garry, & the others came to her world, she tried to take Garry's place by befriending them, & go to be with Ib. However, as they traveled together, Mary wanted to keep Ib, with her in the world of Guertena. However, Garry stopped her, revealing her secret. Enraged, she tried to trade Garry's Rose for Ib's, but was tricked by Keith, for a fake blue flower. Furstrated, she called in Lord Maliss, & Abzu for back up, but was defeated in the end, when Garry, & Ib, & their friends destroyed her painting, destroying her in the process, & turning Lord Maliss into a stone statue, & extinguishing Abzu. Mary is crafty, friendly, but also tircky. After Mary was destroyed, she met Lucifer, & was asked to join his team to get back at both Ib, & Garry, along with their friends that helped, & she agreed returning to life as a human, not a piece of art. However after, being reunited with her father, Guertena, she was reformed, & stopped Lucifer, saving Ib, & the others. Proving her worth, the group forgives her, even Ib, & Garry, now she joins The Miztyk Knights on their journey. 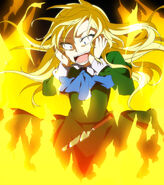 Mary's Final End
Add a photo to this gallery

Retrieved from "https://jadensadventures.fandom.com/wiki/Mary?oldid=206966"
Community content is available under CC-BY-SA unless otherwise noted.