Start a Wiki
Marty the Zebra (voiced by Chris Rock) is one of the four main protagonists of Jaden goes to Madagascar. Wanting to see what lies beyond the Central Park Zoo in New York City, Marty left to see the wild. But his friends caught him, but they were caught be the police, and were to be shipped to Kenya. But they ended up on the shores of Madagascar. Marty was the first one to be excited about being in the wild. But his friend, Alex the Lion , hated him for what he's done. He helped Alex when he was going hungry, and had to isolate himself from everyone so that he wouldn't hurt anyone. 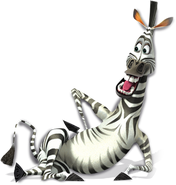 Retrieved from "https://jadensadventures.fandom.com/wiki/Marty_the_Zebra?oldid=241162"
Community content is available under CC-BY-SA unless otherwise noted.