Luke Skywalker (performed by Mark Hamill) is the main protagonist of the original Star Wars trilogy. Luke was a Force-sensitive Human male Jedi Master. He was the son of fallen Jedi Knight Anakin Skywalker and Senator Padmé Amidala, the grandson of Shmi Skywalker Lars, the step-nephew to Owen and Beru Lars, the twin brother of Leia Organa and uncle of Ben. Born on the asteroid Polis Massa, Luke's mother died in labor, and the twins were thought to never have been born by his father, the recently christened Sith Lord Darth Vader. Skywalker was separated from his sister and taken by Jedi Master Obi-Wan Kenobi to the planet Tatooine to be raised by the Lars family, hidden from the Galactic Empire.

Growing up unaware of his origins, Skywalker's life changed forever with his uncle's purchase of two droids—R2-D2 and C-3PO—carrying plans to the Imperial Death Star superweapon. After his aunt and uncle were killed by Imperial troops searching for the plans, Skywalker embarked on a journey to deliver the plans to the Rebel Alliance, receiving training in the ways of the Force from Kenobi, and meeting Han Solo and (unbeknownst to him) his sister, Princess Leia Organa, a member of the Rebellion. Though Kenobi was killed by Vader, Skywalker participated in the Battle of Yavin alongside the Rebels with guidance from Kenobi's spirit, and managed to destroy the Death Star.

As a member of the Rebel Alliance, Skywalker and the Rebels evaded Imperial forces led by Vader, who hunted Skywalker relentlessly over the next three years. As the Rebels were forced to abandon their base during a battle on the snow planet Hoth, Skywalker flew to the swamp planet of Dagobah at the advice of his late mentor, Kenobi, where he received Jedi training from the exiled Jedi Master Yoda. However, Skywalker was lured into a trap by Vader at Cloud City on Bespin, where he engaged the Sith Lord in a lightsaber duel, discovering Vader's identity as his father in the process.

One year later, Skywalker fought in the Battle of Endor before surrendering himself to Vader, realizing he had to confront his father and the Galactic Emperor, Sheev Palpatine. Though Sidious attempted to convert Skywalker to the dark side of the Force, Skywalker declared himself a Jedi and successfully appealed to the good in Vader, who redeemed himself as Anakin Skywalker by destroying Sidious at the cost of his own life. Thanks to Skywalker, the battle ended in a Rebel victory, and he joined his celebrating allies on Endor.

After the fall of the Empire, Luke founded a new Jedi Academy in an attempt to rebuild the Jedi Order. However he was betrayed by his apprentice and nephew Ben, the man who would become Kylo Ren, who killed the rest of Luke's Padawans and joined the dark side under the mysterious Snoke. Blaming himself, Luke withdrew from the galaxy and went on a quest to find the first Jedi Temple. Years later, Luke was found by the Force-sensitive scavenger Rey, who followed the map left behind by Luke with help from R2-D2 and BB-8.

As the son of the Chosen One, Anakin Skywalker, Luke is immensely powerful, and has an amazingly strong connection to the Force, stronger than any Force user currently alive. Luke's Force potential rivals that of even his father. 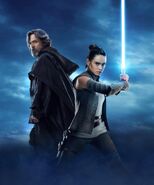 Retrieved from "https://jadensadventures.fandom.com/wiki/Luke_Skywalker?oldid=257292"
Community content is available under CC-BY-SA unless otherwise noted.