"You mess with us and you're not going to jail. You're going to the hospital"
―Luke Cage.

Luke Cage (also known as Power Man, though he dislikes being referred to as such) (performed by Mike Colter) is a Hero for Hire and member of the New Avengers.

Luke Cage has an indestructible skin making him a highly durable ally (as well as a deadly foe) in combat. With his "unbreakable" skin, he can withstand powerful blows and attacks from other foes and is stronger than any superhumans but not be as strong as the Hulk or Thor. 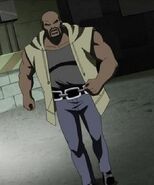 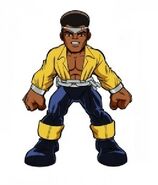 From "The Super Hero Squad Show".
Add a photo to this gallery
Retrieved from "https://jadensadventures.fandom.com/wiki/Luke_Cage?oldid=245032"
Community content is available under CC-BY-SA unless otherwise noted.