Dr Curt Connors (voiced by Joseph Campanella) is a scientist and a friend to Spider-Man's Secret Identity, Peter Parker, in Spider-Man the 1994 animated series. He is a scientist at The Empire State University, and found a way to help people regain lost limbs. He tested the project on a rat. His result were a huge success, that he decided to tried it on himself. He has a wife named, Margret Connors, and son, named Billy. Curt Connors is a good friend to his fellow friends, and family, including Spider-Man. He is a role model for all scientist in New York City. When he tried his experiment on himself, it worked and he got his arm back. He never felt so happy in his life, but there was catch. On his way back home, he started to get extremely scaly. The result from the test, mainly from his research on reptiles, and on medicine. When he got home, his body began to become really more mutant than human.  and eventually disappeared without a trace. When he returned, Dr. Curt Connors had turn into a monstrous creature called The Lizard. He soon wanted to have people look just like him, and it failed when Spider-man gave him an antidote which changed him back. The Lizard is an alternate form and personality of Dr. Curt Connors which has genius intelligence and is a world renowned herpetologist (reptile scientist) . He was created when Connors decided to regrow his right missing arm which he lost while working as a surgeon in the U.S. Army. Connors wanted to regrow his missing arm by using lizard DNA. Connors' experiments with lizard DNA proved more than he could handle. Connors mutated into a giant lizard creature. Iron Man and Mister Fantastic managed to use a machine to activate the dormant part of Lizard's mind enabling the Curt Connors part of the mind to be awakened.

Due to the serum he uses to regenerate missing body parts, it also had an unintended side effect. While transformed into The Lizard, Connors possesses a variety of superhuman attributes. 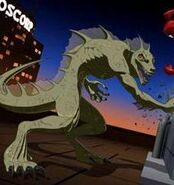 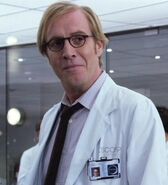 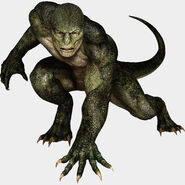 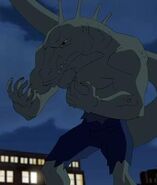 Add a photo to this gallery
Retrieved from "https://jadensadventures.fandom.com/wiki/Lizard_(Curt_Connors)?oldid=232921"
Community content is available under CC-BY-SA unless otherwise noted.