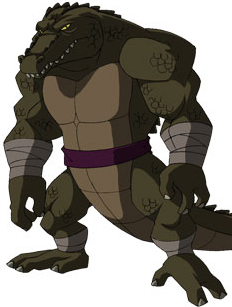 Instead of a villain as was his previous animated incarnation, Leatherhead was an ally to the turtles with a scientific mind like Donatello. He is voiced by F.B. Owens in seasons 2 and 3 and by Gary Lewis in seasons 4 and 7.

Leatherhead was originally an exotic pet who got flushed down to the sewer, somehow ending up in an Utrom base. After being exposed to the same mutagen that would eventually change the Turtles, Leatherhead became a massive, humanoid crocodile. He lived with the Utroms whom he considered his family. He was accidentally left behind during the Shredder's attack, which forced the Utroms to flee Earth.

Retrieved from "https://jadensadventures.fandom.com/wiki/Leatherhead?oldid=257119"
Community content is available under CC-BY-SA unless otherwise noted.