Lea (voiced by Quinton Flynn) is the human form of his Nobody, Axel. Lea was once an inhabitant of the Radiant Garden until the Heartless came, Lea was transformed into a Heartless, while his shell turned into a nobody. He eventually met Xemnas, and became known as Axel, number 8 of Organization XIII. However, after being friends with Roxas, Sora's nobody, and Xion, who would become Jeffrey Dragonheart & Aqua's daughter, he started to help Sora while he was trying to rescue Kairi. After a battle with some Nobodies, Axel faded away. However, since both his Heartless & Nobody were defeated, they reunited & Lea was reborn. The only difference between Lea and Axel, is shown in his face, Axel has a couple of green sashes beneath his eyes, which showed he was a Nobody. Lea doesn't have those sashes at all. The only similarity that the two share, is their powers to control Fire and wield a pair of fire rings. Lea, however, can also wield the Keyblade. 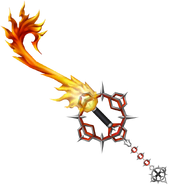 Retrieved from "https://jadensadventures.fandom.com/wiki/Lea?oldid=240346"
Community content is available under CC-BY-SA unless otherwise noted.