Kylo Ren a.k.a. Ben Solo (performed by Adam Driver) is the main antagonist of the Star Wars sequel trilogy. Kylo Ren is obsessed with Darth Vader. Born to Leia and Han after the Battle of Endor, he originally trained as a Jedi before joining and eventually becoming the master of the Knights of Ren, taking it as a surname. His appearance is similar to Darth Vader but his lightsaber is very much like a miniature cross, due to a fracture in the Kyber Crystal. 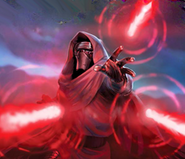 Retrieved from "https://jadensadventures.fandom.com/wiki/Kylo_Ren?oldid=256683"
Community content is available under CC-BY-SA unless otherwise noted.