Start a Wiki
Kirito aka Kazuto Kirigaya (voiced by Bryce Papenbrook in English and Yoshigitsu Matsuoka in Japanese) is a master skilled duel wielding swordsman and the Main Protagonist in Sword Art Online.

Kazuto was only a baby when his parents died, and was adopted by his Aunt Midori, and cousin Suguha, he learned the the truth when he was ten years old. Everything changed when he became a beta tester for a new game, and one of 10,000 people to play only to be trapped inside, the only way to get out was to beat the game. Kirito also gained many friends along the way including Silica (SAO), her pet dragon Pina, Lisbeth, Klein, Agil, his sister Leafa, his girlfirend, Asuna, his daughters Yui, and Strea, Philia, Sinon, Sachi, Yuuki, Eugeo, Alice Zuberg, Selka Zuberg, Ronye Arabel, Tiese Schtrinen, and surprisingly, The Cardinal.

He was once a kind hearted young child, before he lost his parents to the heartless and taken in by his Aunt and Cousin, Leafa. He eventually left for an adventures on different worlds, and became The Black Swordsman, a lone warrior, with a heart as cold as ice. Kirito also managed to learn to Dual Wield two long swords efficiently in battle. He continued to fight on his own, and helped out when ever he could. However, he never went back to his home, because when he was 10 years old, he learned form his Aunt that he and Leafa weren't really siblings, and started avoiding his family, and eventually, left for his own reasons, and never went back. All he knew was to battle, help, and survive, without anyone. But that all changed one day when he met The Miztyk Knights, and eventually a young girl named Asuna Yuki, an apprentice swordswoman, to Heathcliff, a powerful and legendary warrior. Kirito eventually started to warm up, and eventually the two fell in love, and at the same time, he earned the trust of Heathcliff, and was bethrothed to Asuna, and the two were married, and soon had a daughter named Yui. So, Kirito eventually returned to his home, and repaired the time lost from his family. 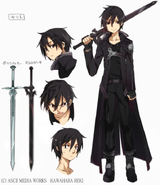 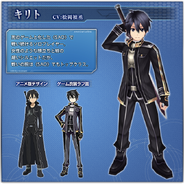 Retrieved from "https://jadensadventures.fandom.com/wiki/Kirito?oldid=247862"
Community content is available under CC-BY-SA unless otherwise noted.