King Ghidorah is the overall main antagonist of the fantasy adventure teams franchise. he serves as one of the main antagonists of the Jaden's adventures series and the main antagonist of the Shanezilla series. he is a three-headed dragon with the power to unleash electricity through his three heads. Ghidorah first appeared in Ghidorah, the Three-Headed Monster, where he fought Godzilla, Mothra, and Rodan, under the name Ghidorah. He would eventually become Godzilla's Arch Rival, as he became his opponent in Godzilla vs. King Ghidorah, under the name onward, Ghidorah. Eventually he met Bowser, and his Koopa family, and joined his team. King Ghidorah is both powerful and dangerous to his enemies. Ghidorah is one of many ancient evil dragons manifesting within its original form, three bat like dragons called the Dorats. After Bowser discovered them, and took the creatures in, he learned that the creatures were specialized in terror. The Dorats didn't know what Bowser had in store for them after discovering this, from further discoveries of deterioration, he combined the three, and fused them from the Chaos Emeralds, and created King Ghidorah.

Dorats the infants who become Ghidorah 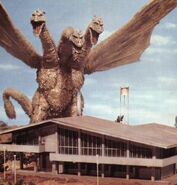 Ghidorah when he first appears