Start a Wiki
"Don't ever forget. Wherever you go, I'm always with you." -Kairi to Sora.

Kairi (voiced by Hayden Panettiere and Alyson Stoner in English and Risa Uchida in Japanese) is one of the several main characters in the Kingdom Hearts franchise. She serves as Sora and Riku's best friend, one of the Seven Princesses of Heart, the original persona of Naminé, and is Sora's main love interest.

Kairi, along with her friends, wanted to see new worlds. One night, the island was attacked by creatures called the Heartless, and Kairi's heart chose Sora as a vessel. Eventually, Sora learned that she was a princess and that her heart is in him. He was able to free it by using the Keyblade of People's Hearts, but became a Heartless as a result. Kairi was able to bring Sora back to his human self by protecting him from other Heartless. Kairi lends Sora her lucky charm, and Sora promised to return it to her. When Ansem the Seeker of Darkness was defeated, and the Door to Darkness was sealed, Kairi is transported back to the island, where she waited for him. Sometime later, a hooded man named Axel came for her. He captures her in order to lure Sora (so he can see Roxas again). They soon reunited with each other and Riku. After Xemnas' defeat, they returned home. But their journey has not yet ended...

Kid Kairi from Birth by Sleep 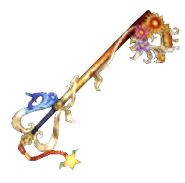 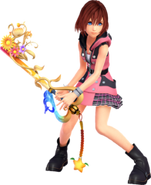 Retrieved from "https://jadensadventures.fandom.com/wiki/Kairi?oldid=256238"
Community content is available under CC-BY-SA unless otherwise noted.