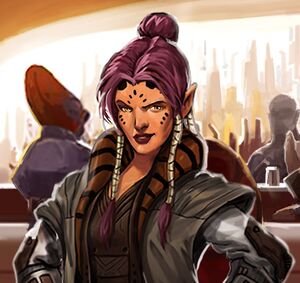 Kada Jahr is a young female Devaronian who has worked for Jabba the Hutt in recent years, in charge of “security.” Kada was hired by Jabba because of her extensive network of smugglers and mercenaries in the underground, as well as her reputation as the progeny of a well know and dangerous merc, Arann Jahr. Arann was mysteriously killed during a routine smuggling operation which has propelled Kada’s desire to embed herself in his world. In the relatively few years working as a merc liaison and security expert, Kada’s exemplary work did not go unnoticed by important smugglers throughout the galaxy. Kada is known to come off cold, but is not without humor, which is often relayed sarcastically. She’s shadowy and mysterious, and while appearing to be an unsavory and untrustworthy character on the surface, is in fact, extremely loyal and dependable.

She works with Saponza to provide aid to the Rebel Alliance.

Retrieved from "https://jadensadventures.fandom.com/wiki/Kada_Jahr?oldid=203919"
Community content is available under CC-BY-SA unless otherwise noted.