Juniper "June" Kim Lee (voiced by Lara Jill Miller) is  an 11 years old, Asian girl blessed with magical powers that grant her the title of Te Xuan Ze at the age of 11, thus becoming the protector of the hidden world of magic. It is her duty, as Te Xuan Ze, to keep the balance between good and bad magic and keep the world of humanity in the dark about its magical counterpart. But, because of her young age, Juniper faces many struggles in balancing her normal and magical life, and keeping her powers a secret from her family.  When she's not involved in some magical hulabaloo, Juniper acts just like any normal girl. She likes to hang out with her friends and enjoys doing sports such as volleyball and skateborading. She also plays guitar in her own band along with her brothers Dennis and Ray Ray.

Origins: Awakening as Te Xuan Ze Not much is known about Juniper's early life aside that she was born a Chinese American like her brothers. She grew up as a normal little girl in Orchid Bay City until she earned the powers of the Te Xuan Ze through her magical lineage.

One day, while visiting her Ah-Mah, Juniper was plagued by a painful stomach ache. This stomach ache was later revealed to be part of the activation of her Te Xuan Ze powers, and it eventually reached its zenith when some demons attempted to inflitrate the house and eliminate the new Te Xuan Ze. After a short trance-like spell, June discovered that she was able to see the monsters attacking the house, and that she had developed superhuman strength and agility. In addition to this, one streak of her hair had turned white much like her Ah-Mah's (which is in fact the Te Xuan Ze trademark). After getting rid of the demons and saving her brother Ray Ray, June took up the mantle of Te Xuan Ze to replace her grandmother.

Being the Te Xuan Ze, June possesses many magical and superhuman abilities that help her deal with the different creatures of the magical world, such as:

In one occasion she stated that she doesn't have any magical power even though her powers come from an ancient magic and she can do spells, as well as other characters have said that she has magical powers. This makes the nature of her powers ambiguous at the best.

June is an asian girl, with a slender body and long black straight hair, almost reaching her waist with a pink wisp. She very long legs and three freckles above her nose forming a triangle. She also is known for having incredibly large feet.

She has said to have a hair too straight and a flat nose.

June's clothes are a pair of brown shoes, a pair of blue jeans, a green t-shirt with short sleeves and pink edges and a stylized stylized pink juniper flower on the chest.

Turned into a Ring Tailed Lemur 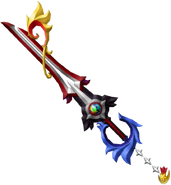 Divewing (Juniper Lee's Keyblade)
Add a photo to this gallery
Retrieved from "https://jadensadventures.fandom.com/wiki/Juniper_Lee?oldid=253985"
Community content is available under CC-BY-SA unless otherwise noted.