Jim Crocodile Cook (voiced by Tom Wayland) is the top ranked duelist at South Academy, and another friend to Jaden. He speaks with an Austrilian accent, and has a crocodile named Shirley. He duels with a Fossil Deck. 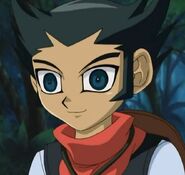 Retrieved from "https://jadensadventures.fandom.com/wiki/Jim_Crocodile_Cook?oldid=249452"
Community content is available under CC-BY-SA unless otherwise noted.