Hiccup (voiced by Jay Baruchel) is the main protagonist of Jaden Learns How to Train Your Dragon. He at first wanted to be a viking like everyone else, but was a bit of a screwup. He worked as an apprentice for Gobber The Belch as Blacksmith, and the son of Stoick the Vast, Berk's viking leader. He also wanted to impress the girl of his dreams, Astrid. After he took down a Nightfury (the most dangerous dragon ever), he didn't have the heart to kill it. He instead decieded to help it learn to fly (because it was missing a fin tail), and named it Toothless. Hiccup than discovered that dragons aren't really a threat to the Vikings, but are only raiding them to feed a much bigger dragon, called The Red Death, giant ferocious Seadragon. With the help of Toothless, Astrid, Jaden and his friends, they defeated the dragon, and brought harmony between the vikings and dragons, and Hiccup and Astrid became a couple. Hiccup also became friends with Fishlegs, a friend/rival with Snotlout Jorgenson, along with the twins, Ruffnut And Tuffnut. He even helped out his dad, train his own dragon, now named Thornado.

In Jeffrey, Jaden & Friends' Storm Adventures of How To Train Your Dragon 2, Hiccup reunites with his long lost mother Valka.

With his Prosthetic Leg 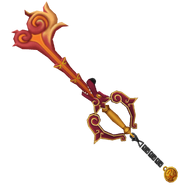