Hawkeye (real name Clinton "Clint" Barton)(performed by Jeremy Renner) is anAvenger and former Agent of S.H.I.E.L.D. He is the team's expert marksman.

Hawkeye doesn’t possess any powers, but is an impressive archer and combatant.

Speed: Hawkeye is shown to be able to run at an above average speed.

Agility: Hawkeye has proven to be at a high level of human agility, able to move, dodge, and react to dangers quickly.

Strength: Hawkeye has above average strength.

Marksmanship: Hawkeye is an impressive marksman, able to hit assorted targets with assorted projectiles with ease and accuracy. He’s always seen using a bow and with an assortment of trick arrows.

Hand-to-hand Combat: When his bow breaks or he runs out of arrows, Hawkeye won’t shy away from hand-to-hand combat. 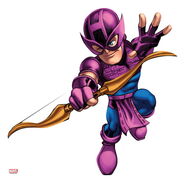 From "The Super Hero Squad Show"

From "Avengers: United They Stand"

In "Marvel Disk Wars: The Avengers"
Community content is available under CC-BY-SA unless otherwise noted.