Brought to life by Heylin magic centuries ago, Hannibal Roy Bean (voiced by Tom Kenny) could easily be considered one of the most powerful forces of evil, and the main antagonist in the third season of Xiaolin Showdown. After Wuya's defeat 1500 years ago, Hannibal had his chance to turn Chase Young to the dark side which he did but after this, Chase betrayed him and locked him up within the Ying Yang World for all eternity, which according to Dojo Kanojo Cho, put a real strain on their relationship.

In the Adventure Series, ever since Hannibal and Chase have been rivals all along, the Egyptian God of Death with jackal-head named Anubis recruited them to come along together, which in the end two Heylin Warriors became two of Set's recruits once again with their new goal to destroy The Rainbooms and The Justice Guardians, and searching for 13th vessel for Master Xehanort's heart.

Grogar, the tyrannical lord of the Heylin side himself, used his magic to bring this bean into living, becoming one of Grogar's Heylin demons and as his right-hand man. 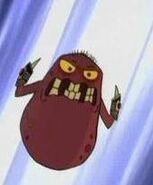 Hannibal's armor
Add a photo to this gallery

Retrieved from "https://jadensadventures.fandom.com/wiki/Hannibal_Roy_Bean?oldid=256027"
Community content is available under CC-BY-SA unless otherwise noted.