"You're too late, Twilight Sparkle. Soon, all of Equestria and the entire universe will fall and a new Tambelon and the Heylin Empire shall rise from the ashes!" - Grogar to Twilight Sparkle

Grogar (voiced by Michael Bell in "My Little Pony 'n Friends", Doc Harris in "My Little Pony: Friendship is Magic", and voice actor required for MelSpyRose's version) is an evil ram sorcerer and the overall main antagonist of "The Rainbooms' Adventures Series". He is the ruler of the City of Tambelon, the Emperor of All He Saw, and the father of monsters himself, a magically powerful tyrant who once ruled and terrorized Equestria with an iron hoof in ancient times 'till he was confronted and defeated by his arch-enemy, Gusty the Great. He also have created Lao Mang Lone Soup with his Heylin magic that turned Chase Young evil forever, which is revealed he is the very first ancient lord of the Heylin Empire, even Grim is well aware of him.

Thousands of years ago, before Equestria was founded, the land before then was a scattered collection of farms and pastures. Then, an ancient ibex-like creature named Grogar came and seized control of the world, declaring himself "Emperor of All He Saw" and is the very first Heylin being in the universe as god of the Heylin side. Using his powerful dark Heylin magic and his baleful Bewitching Bell, he created the most fearsome creatures, evil sorcerers, witches, demons, warriors, etc, and unleashed throughout the realm, terrorizing the populace between ponykind and humanity, leading his empire conquering the world, and ushering in an age of fear and darkness, plunging the world into 10,000 Years of Darkness. Thus, he earned another title known as... "The Father of Monsters". However, his evil reign of the Heylin Empire had finally come to an end when he fought the legendary Xiaolin heroine, Gusty the Great. Leading an army of unicorns up a hill to Cloudsdale, they were intercepted by Grogar. Gusty ordered her troops to bind him with their magic, which bore the strength of a thousand armies. But Grogar, with all his powerful Heylin magic, escaped his bonds by feeding of the ponies' fears. During the battle, Gusty while wielding the most powerful Equestrian artifact, Harmony Gauntlet, with help of Grand Master Dashi, Master Monk Guan and Chase Young (before he turned evil) managed to steal the source of Grogar's power, the Bewitching Bell, leaving him virtually powerless. The evil god of the Heylin side himself was banished, never to return to this world again, and his bell was hidden away in a cave high atop Mount Everhoof, where it was protected by a force field and magical winds created by Gusty herself. In time, even after Equestria's founding, everypony and everyone would always remember the legend of Gusty and Grogar, but see them only as mythological figures. Gusty the Great would be an inspiring hero to everypony and everyone, encouraging ponies and people of the world to never give in to fear and have hope for freedom and happiness, and who proved all these by defeating Equestria's first emperor and the first Heylin being/Heylin god of the universe. As for Grogar, he was forgotten by some ponies and some people, hardly known to the current generation, and written off as a myth by older generations, within and outside of Equestria. Even foes from centuries or older have revered and feared this ancient tyrant. It is clear to many that he completely represents tyranny, which is the inversion of friendship; in friendship, all serve for each other, while with tyranny, all serve one and the one only serves oneself. By far Grogar was one of the greatest tyrants that had ever existed in the universe, including Equestria itself. 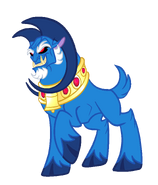 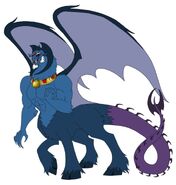 Grogar in his demonic centaur form 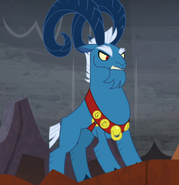 Add a photo to this gallery
Retrieved from "https://jadensadventures.fandom.com/wiki/Grogar?oldid=256091"
Community content is available under CC-BY-SA unless otherwise noted.