Godzilla is a legendary monster who causes havoc at big cities. But he isn't evil, because he'll protect people from evil monsters. From the beginning, he was once of a symbol of nuclear warfare, mainly because he was created in country that witnessed its power first hand, Japan, but has also gained allies in his fight to protect the Earth itself, his allies include mainly his cousin Rodan, and Mothra, his opponents are mainly from outer space such as his robot counterpart Mecha Godzilla, and his greatest and ultimate rival, King Ghidorah. Another enemy Godzilla has faced is Destoroyah, in the Heisei finale movie series Godzilla vs. Desotroyah.

Godzilla has been a good guy, a bad guy, a father, and even an enviornmentalist, mainly from one of his films in the Showa Series, called Godzilla vs. Hedorah. He was born in Japan of 1954, and his name was based on one of the employees at Toho Company LTD. of the time. In Japan, Godzilla, is called Gojira, after one of the members that was working their at the time. One of The amazing allies that both Zilla, and Godzilla have made, is Winnie the Pooh. Godzilla also has a nephew named, Godzooky, and three sons named, Godzilla Jr., Minilla, and Little Godzilla. When Zilla was destroyed in New York, his body was used by Bowser Koopa, however, a droid named R2-D2, one of Pooh's friends, was able to snatch enough of Godzilla's DNA to create, a clone, called Zilla that helps out another of Pooh's friends, a powerful psychic Pokemon named Mewtwo, while his original body was turned into a Cyborg, by Bowser, and has now known as, Cyber-Zilla, however, Ryuga, actually created a blue print from the Japanese Godzilla, and created a robot from the original 1954 bones, and created Mechagodzilla. 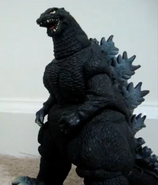 Godzilla the American Godzilla
Add a photo to this gallery

Retrieved from "https://jadensadventures.fandom.com/wiki/Godzilla?oldid=243342"
Community content is available under CC-BY-SA unless otherwise noted.