Garry is an 18 yr. old boy who gets trapped in the art galleries alternate world. He meets our heroes, & Ib while in the gallery, & later on Mary. Garry gets really scared out of his wits with all the artwork trying to get them. Garry was one of the only people to discover that Mary was a painting & hold her of while Ib, & the others burn her painting. Garry can be brave, however, be really funny when he gets scared silly. Garry is also known to carry a lighter, which he uses to help light out the rooms where the lights go out, & they can't see even their hands in front of their face. His lighter is also how Ib, & the others defeat Mary, by destroying her painting. Garry also hates Lucifer, mainly due to the fact that brought back Mary from destruction as a real person. The only one that gives Garry the creeps is Abzu, mainly due to the fact that he can shange his form, & posses any unfortunite person that touches him, controling them just like a marianet controling a puppet. Along with his abilities to create the heartless. 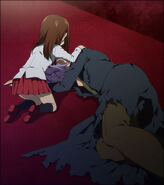 Ib, & Garry saying Good-Bye to each other
Add a photo to this gallery

Retrieved from "https://jadensadventures.fandom.com/wiki/Garry?oldid=254719"
Community content is available under CC-BY-SA unless otherwise noted.