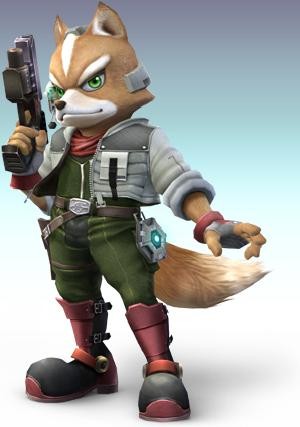 Fox McCloud is a fox who is the main character of the Star Fox series, and leader of the Star Fox team since his father, James McCloud, went missing after his capture by Andross. When he heard about his father's disappearance, he dropped out of the Cornerian Air Force. At the start of the series, Fox was young and still learning under the training of Peppy Hare, his father's friend and wingmate. Since then, he has become an expert pilot, and has repeatedly brought tranquility to the Lylat System. Fox is skilled in both air and ground based attacking, as seen in Star Fox: Assault. Fox also began a relationship with Krystal at the end of Star Fox Adventures which continued through Star Fox: Assault and ended in Star Fox: Command when Fox forced her off the team fearing for her safety. She ended up joining Star Wolf and began a relationship with Panther but that didn't last because Fox ended up coming to Katina looking to get Krystal to rejoin Star Fox. Though at first she didn't want too, she ended up agreeing to rejoin the team and though she was cold to Fox along the way, Slippy managed to convince her that they are meant for each other. Following the defeat of the Angler Emperor on Venom, Fox, Falco, and Slippy finally managed to convince Krystal to permanently rejoin team Star Fox when Fox promised that they would always be together. She rejoined and the team and later the they ended up recruiting Slippy's fiancee Amanda on Aquas.

Retrieved from "https://jadensadventures.fandom.com/wiki/Fox_McCloud?oldid=247840"
Community content is available under CC-BY-SA unless otherwise noted.