Fishlegs (Voiced By Christopher Mintz-Plasse) Is One Of Hiccup's Friends In Jaden Learns How to Train Your Dragon. He also One Of The Smartest Vikings, Meaning That He Had The Dragon Knowledge, Claiming That He Read The Book "7 Times", Although Fishlegs normally acts nervous and frightened, but has an inexhaustible arsenal of facts and expresses his knowledge in role-playing game terms. He Has The Female Gronkle, Named Meatlug, (Although Fishlegs Thought Meatlug Was A Boy, Until Meatlug Lays Eggs And Finds Out That Meatlug Is A girl.) He Likes Meatlug Alot Because Meatlug Was Cute And Babyish And Takes Care Of Her Like A Mother. Fishlegs often shows a rather soft, babyish side. He Also Scared Of Alvin The Treacherous By Screaming Like A Terrified Woman Maniac. Everyone Asks Fishlegs To Stop That Because Fishlegs Still Memorized The Knowledge Of The Dragon Book By Saying Dragons Biology Around The Dragon Training. 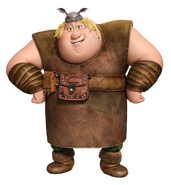 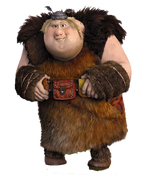