Start a Wiki
Darth Maul (performed by Ray Park) is a fictional character in the science fiction saga Star Wars. Trained as Darth Sidious' first apprentice, he serves as a Sith Lord who is a master of wielding a double-bladed lightsaber. He is the main antagonist of Star Wars Episode I: The Phantom Menace and one of the main antagonists for Star Wars: The Clone Wars.  In Star Wars Episode I: The Phantom Menace, Darth Maul was ordered by Darth Sidious to capture Queen Padmé Amidala and eliminate Jedi Knight Qui-Gon Jinn and Padawan Obi-Wan Kenobi.

On Tatooine, Maul intercepts Qui-Gon while approaching the Queen's starship. While Anakin Skywalker gets onboard, Qui-Gon engages Maul in a lightsaber duel. But the Jedi Knight manages to get away from the Sith Lord.

During the film's climactic scene, Maul fights the Qui-Gon and Obi-Wan. During the fight against the two Jedi, he stabs Qui-Gon in the stomach with his lightsaber, fatally injuring the Jedi Knight during the duel. Maul then knocks Obi-Wan into a reactor chasm; at the last minute, however, the Jedi Padawan uses the Force to propel himself out of the chasm, equipping himself with his master's lightsaber. Obi-Wan quickly slices Maul in half from the waist. Maul's body separates into two pieces and falls to his apparent death.

On Star Wars: The Clone Wars which is set after Star Wars Episode II: Attack of the Clones but before Star Wars Episode III: Revenge of the Sith, Darth Maul's origins were elaborated upon as a warrior of the Nightbrother clan on the planet Dathomir which is also inhabited the dominant Nightsister society of women who practice witchcraft and are led by Mother Talzin. The tattoos covering his body are described as the markings of a warrior (in contrast to earlier sources which identify his bodyart as the markings of a Sith Lord). He was also aware of his Master's plan involving the Clone Wars.[4]

Maul was later revealed to have two brothers: Savage Opress and Feral. Opress was taken into the Nightsisters' custody and used their magic to turn him into a ruthless beast under their control; to complete the transformation, Savage murdered Feral. Opress then becomes entangled in a power struggle between Count Dooku and Asajj Ventress but manages to break free from both of their control. With no one to lean on, Opress returned to Mother Talzin and learned about Maul, and sought to find his brother.

Having survived his bisection in The Phantom Menace, Maul was striving to survive by any means and ended up on the junk planet Lotho Minor in the Outer Rim and turned into a cyborg with an arachnid-like lower half, and managed to survive with the help of Anacondan Morley. Over the decade, Maul's mind sank into a melancholy insanity before he was found by Opress. Opress's presence causes Maul to remember his downfall by Obi-Wan Kenobi and resolves to have his revenge. Brought back to Dathomir in the aftermath of the Nightsisters' slaughter by Dooku's forces, Maul undergoes a purging of his madness and is given a new pair of robotic legs crafted by Talzin's magic. With his mind restored, Maul learns from his brother that the Clone Wars have started without him. With the help of Opress, he proceeds to extract revenge on Obi-Wan by luring him into a trap by attacking a small village on outer rim planet Iridonia, knowing that the Jedi will come to assist. However, Asajj's unexpected appearance to collect a high bounty placed on Opress thwarts this plan. Kenobi and Ventress duel Maul and Opress in the cargo bay of Opress's stolen ship but soon realize that they are outmatched and are forced to flee via the cockpit escape vessel. Maul decides not to pursue the jettisoned pod but to wait for another opportunity, realizing that the Jedi already know of his continued existence through the Force.[5]

Darth Maul and Savage Opress return in the fifth season. Maul clarifies to Savage that they're master and apprentice and they'll kill any one standing in their way as they attempt to set up their own criminal underworld. Needing followers, the Sith Lord brothers travel to Florrum where they manage to convince Weequay pirate Jiro and his crew to join him and in turn betray their leader Hondo Ohnaka. But experienced from past situations, Hondo is not easily fazed as Maul's recruits fell apart with the arrival of Obi-Wan and Adi Galia but Galia killed by Savage. After Savage's arm is sliced off by Obi-Wan and Maul's legs blown off by the pirates while their ship damaged, Maul and Savage escape in an escape pod. Maul and Savage are later found by the Death Watch Mandalorians led by Pre Vizsla. After Vizsla gives Maul a new set of legs and Savage a new arm, the brothers see this as an opportunity to get revenge on Obi-Wan. Maul offers Vizsla the chance to reclaim Mandalore, using his unsavory methods to recruit the Black Sun (after having Savage kill off its previous chain of command), Pyke family (spice traders connected to Coruscant's crime families), and the Hutt Council after impressing Jabba the Hutt with his determination, creating the criminal syndicate named Shadow Collective. From there, he engineered Vizsla's rise to power by having his army of thugs attack Mandalore and have the Death Watch arrest them to make themselves look like heroes and demonize Duchess Satine's policy. But having expected Vizsla to betray them after they do his dirty work, allowing himself to be arrested, Maul decides to replace Vizsla with Almec, a prime minister who Satine locked away for corruption. Easily breaking free, Maul challenges Vizsla to a duel to take over Death Watch and Mandalore, killing him and claiming Vizsla's darksaber. He wins the loyalty of most Death Watch members while Bo Katan retreats along with those loyal to their previous leader. From there, Maul anticipated Satine being broken out of prison and her attempt to contact the Jedi Council as part of his plan to get Obi-Wan to Mandalore. Once Obi-Wan arrives and fails to escape with Satine, Maul captures him and kills Satine right before the Jedi Master to make him suffer rather than kill him straight away, then sends him to a jail cell so he can agonize. But while Obi-Wan is freed by the Night Owl rebels, Maul senses Darth Sidious arriving on Mandalore. Although impressed with his former apprentice's survival, the master declares the student a rival and uses the Force to push and choke the Zabraks brothers. In retaliation, the brothers draw their lightsabers, but Sidious also pulls out two of his own and engages them, promptly killing Savage in the duel. Maul immediately rushes to his brother's side. Savage, in his dying breath, states he was not worthy of being his brother's apprentice and never was. After Savage dies, Sidious reminds Maul of the Rule of Two and that he had been replaced. Enraged, Maul pulls out both his lightsaber and darksaber and proceeds to fight Sidious on equal ground with lightsabers and is ultimately beaten by Sidious's power in the force. Maul pleads for mercy, but Sidious ignores him and fires a continuous stream of lightning at Maul. As Maul cries in agony, Sidious states that he won't kill Maul as he may be of use to him.

To be added at a later date 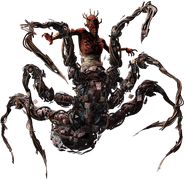 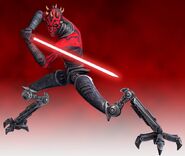 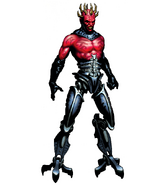 Add a photo to this gallery
Retrieved from "https://jadensadventures.fandom.com/wiki/Darth_Maul?oldid=252823"
Community content is available under CC-BY-SA unless otherwise noted.