Danger Duck (Voiced by Jason Marsden) usually referred to as just Duck, is the spotlight hungry, egotistical member of the Loonatics. He is a descendant of Daffy Duck and most likely Melissa Duck.

Duck longs to one day lead the Loonatics, though he does seem to tolerate Ace's leadership. Before gaining his powers, Duck worked as a swimming pool cleaner, and true to form, he dreamed of becoming a lifeguard.

He is usually shown up by other characters or angering them with his antics. He is very boastful and has a habit of attempting to re-invent himself (such as requesting name changes for himself, or attempting to add a cape to his uniform). He can also be extremely opportunistic.

Danger Duck, even though sometimes he doesn't prove it, is one of the strongest members of Loonatics, since his powers evolve with time. He also possesses the most destructive potential out of the entire team. He is sometimes hinted to be somewhat a co-leader of the group since he from time to time gives orders that even Ace and Lexi will follow without question. Overtime, he also becomes very close to his comrades, especially to Lexi whom he sometimes calls "sister" and Ace who occasionally sees Duck as a brother-figure.

as a poolboy before becoming a superhero 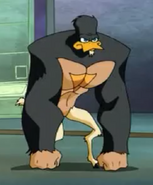 as a Gorilla/Goat mutant hybrid
Add a photo to this gallery
Retrieved from "https://jadensadventures.fandom.com/wiki/Danger_Duck?oldid=228491"
Community content is available under CC-BY-SA unless otherwise noted.