Daffy Duck (originally voiced by Mel Blanc, currently voiced by Jeff Bergman) is a cartoon duck from the Looney Tunes and Merrie Melodies cartoon series. He is considered to be Warner Bros.' second-biggest cartoon star (after Bugs Bunny), although the shorts and other media portray him as in the shadow of Bugs' popularity. Daffy began as a crazy, whooping screwball in cartoons like The Wise-Quacking Duck (1943) and Daffy Duck and Egghead (1938), but directors Chuck Jones and Friz Freleng developed him into a megalomaniacal duck determined to be a bigger star than Bugs. He believes he is the master of every situation, even when he is beaten by his opponents (after which he will most likely utter something like, "Well, he asked for it!") He is also teamed up frequently with Porky Pig, sometimes with the pig as Daffy's adversary (1944's Duck Soup to Nuts, 1948's Daffy Duck Hunt), Daffy as the pig's adversary (1951's The Prize Pest, 1961's Daffy's Inn Trouble) or as a sidekick to Daffy (many Chuck Jones cartoons, like 1951's Drip-along Daffy and 1953's Duck Dodgers in the 24 1/2th Century). 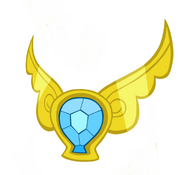 Retrieved from "https://jadensadventures.fandom.com/wiki/Daffy_Duck?oldid=258238"
Community content is available under CC-BY-SA unless otherwise noted.