Start a Wiki
Scott Summers, also called Cyclops (performed by James Marsden) is a mutant and part of the X-Men.

Cyclops's mind has a particular psionic field that is attuned to the forces that maintain the apertures that have taken the place of his eyes. Because his mind's psionic field envelops his body, it automatically shunts the other-dimensional particles back into their point of origin when they collide with his body. Thus, his body is protected from the effects of the particles, and even the thin membrane of his eyelids is sufficient to block the emission of energy. The synthetic ruby quartz crystal used to fashion the lenses of Cyclops's eyeglasses and visor is resonant to his minds' psionic field and is similarly protected.

The extra dimensional supply of energy for Cyclops's eye-blast is practically infinite. Thus, so long as Cyclops's psionic field is active (which is constant), there is the potential to emit energy. The only limit to the eye-blast is the mental fatigue of focusing constantly. After about 15 minute of constant usage, the psionic field subsides and allows only a slight leakage of energy to pass through the aperture. Cyclops's metabolism will recover sufficiently for him to continue in about an additional 15 minutes.

In a old issue Cyclops absorved Storm's thunderbolt and the Optic Blast derivated from it was white colored and supposedly add electrical features. This can be explained due to the origin of his optic blast (the non-Einsteinian universe) wich do not obey to our universe rules and so it's impossible to know how it reactes with all other forms of energy.

The maximum force of Cyclops' optic blasts are unknown, but a commonly given description is that he can "punch holes through mountains", and he has been shown to rupture a half-inch thick carbon steel plate. 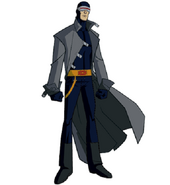 In "Marvel Disk Wars: The Avengers"
Add a photo to this gallery
Retrieved from "https://jadensadventures.fandom.com/wiki/Cyclops?oldid=238603"
Community content is available under CC-BY-SA unless otherwise noted.