Cyber-Zilla is Bowser Koopa's Cyborg monster. He was originally seen in the Fox Kids TV Show, Godzilla: The Series, the three-parter series, The Monster Wars Trilogy. In the actual show, a race of aliens called the Tachyons, revive and transform the creature into a cyborg. It served as one of the many soldiers that fought for the Tachyons until it was defeated in the end by his birth son, Zilla. In the adventure series, This creature was originally the first Zilla when it attacked Manhattan. After it was defeated, Bowser found the body and took it to prepare a way to revive the creature, by turning it into a cyborg. Unaware, of a stowaway, R2-D2 was able to acquire enough of it's DNA, to help Mewtwo create a clone of the creature. Bowser was able to revive the creature, and dubbed the creature Cyber-Zilla. The creature meets his end when Zilla destroys its wiring inside by ripping off the armor, shutting it down. But Bowser is able to repair the beast to face Zilla again when needed. Cyber-Zilla is in fact the Original Zilla but with additional features, Cyber armor with a load of weaponry. Cyber-Zilla is armed and dangerous. 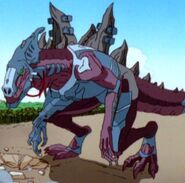 Retrieved from "https://jadensadventures.fandom.com/wiki/Cyber-Zilla?oldid=238027"
Community content is available under CC-BY-SA unless otherwise noted.