Start a Wiki
"There must be a Genie like me in every dimennsion known to man. I'm the guy who can get if for you; bubblegum, a bag of MLP collectibles, if that's your thing, a bottle of carbinated grape juice to celebrate your new years eve party, dag-gum near anything within reason. Yes sir, I'm a regular Sears and Wal-Mart."  -Craig (That'sme, I said thtat) .

Hi there, folks. The name's Craig Lopez and I'm a semi-phenomenal, nearly cosmic powerful Genie, traveler of many dimensions & various time streams and the Main mascot of Craig & Friends Adventures Series. Such a glamorous career, isn't it?

Origin Story (the story of my cosmic career)

I was an average joe in the 21st century,  living in a small town in when I walked into this Pawn shop, looking for something to cheer up my sister; Catherine and just happens to notice this really old grandfather clock wasn't the right time, so I went to fix-it until he was whisked away back in time unconsciousness (as if that wasn't a big give away), but when I woke up, I found myself outside the city of Agrabah (This was like a couple of years after Aladdin and Jasmine tied the knot).

As I was walking through the marketplace, I found a wagon full of strange and old items being collected by a hobo. So quickly I went through it and he found a Magic Lamp (like the one in Once Upon a Time) and of course O had rubbed the lamp and meet Ari; the almighty, cosmically powerful genie of the lamp.

I had decided to give Ari his third wish to him and use the remaining two wishes. My first wish was to impersonate every single voice my knew (be it celebrity, animal, ect) making me one of the best impressionist ever and as for my second wish was to be part Toon (mainly like roger rabbit, scooby doo & the looney tunes). But after I made my second wish, I had noticed that Ari had a crush on a girl named Monica down at the marketplace, he couldn't take his eyes off her. So I asked Ari if he'd ever talked to her, Ari quickly told me he hasn't done so because he was scared that the girl he loves wouldn't love him back because of his..........current job position (*whispers* Genie of the lamp).

But I had a brilliant idea and told him that we could trade places. (Like what Genie and Iago did once) After me and Ari traded places, I feel unconscious and Ari went to check on me to see if I was okay after the switch. To which I sprung up and started bouncing around the marketplace as Tigger doing the Whoop-de-Dooper Loop-de-Looper Alley-Ooper Bounce (cause that's what Tiggers do the best ya know)

So before Ari went to meet the girl of his dreams, I handed him a small scroll which he should use in case of a serious emergency. We divided and went to do what they wanted to do. Ari eventually introduced himself to Monica and they hit it off very well. Meanwhile, I was the talk of the town as I was helping out the citizens and everyone was cheering cause he was doing better than when Iago did it. At which time Ari and Monica watched and Ari thought to himself how much better I was at being a Genie than he was.

Things were going well for a  good while until suddenly (*dun dun dun dun*) an evil warlock came to Agrabah. Looking for the Genie of the lamp his been hearing about, he eventually captured Ari, Monica and me thinking that one of us was the current genie of the lamp untill I did an impression of Rodney Dangerfield that gave me away as the genie (, it looked as if he'd get his way until I whispered to Ari to tell Monica the truth and give me back the scroll, the warlock noticed it and asked Craig what that was to which he told the warlock that it was "Ari's last wish".

The warlock snatched the scroll from my hand but what he didn't know is that I tricked the warlock into reading the scroll which read "I wish for Craig to take Ari's place as the all powerful Genie of the Lamp and be send to another part of time."

At that moment, the wish was granted, what magic Ari had left was transferred to me, making me an all Powerful Genie, which pulled me into my newly reshaped magic lamp (which now looked like Genie's Lamp but with the color scheme as Jafar's lamp). But before fully being sucked into the lamp, I had snatched the warlock's assistant, Kreeper as well as the warlock's book of spells and his magic hat which had then rendered him powerless.

Ari called the guards to quickly apprehend the warlock and place him under arrest, Ari figured that Monica wouldn't speak to him again after he lied about who he was but Monica told him that she didn't care if he had magic, she loved him for being caring and compassionate, Ari and Monica lived happily ever after. ﻿

As for me on the other hand, me and Kreeper finally landed in Medieval England where we'd spent several hundred thousand years in the lamp, deep underground until one day Kreeper had enough of me and my new found craziness and manages to dig him amd my genie lamp out of the ground, where we were sent through the time portal. I'd started to bark at Kreeper to release him, but Kreeper rebels against me and throws the lamp into a nearby well. Later that night, a young

I had continued jumping from one century to another, granting wishes left and right, going on adventures like sailing the Titanic (1997 movie) and helping to construct Frankenstein until I wound up in the town of San Ángel to what would be the beginning of one of his greatest adventures of my life.﻿ 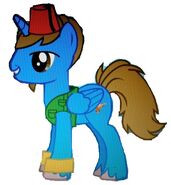 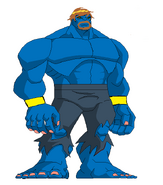 Full bodyvwith Lamp
Add a photo to this gallery 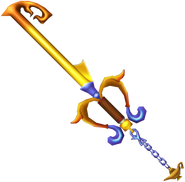 Craig's Vigilante Tool (Cap's Shield, Logan's Claws and Spidey's Web-Shooter in one)
Add a photo to this gallery
Retrieved from "https://jadensadventures.fandom.com/wiki/Craig_the_Genie?oldid=252125"
Community content is available under CC-BY-SA unless otherwise noted.