Cogsworth (voiced by the late David Ogden Stiers) is a major character in Jaden meets Beauty and the Beast. He serves as one of the Beasts servants, who along with everyone else was placed under an enchantment. Cogsworth is a bit of a stick in the mud, because he intrudes on everyone's fun, and tries to stop Lumiere's ideas. But it's only because he is afraid of The Beast's anger. In the end, Cogsworth, along with everyone else, returned to their original form. 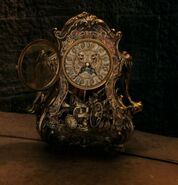 Add a photo to this gallery
Retrieved from "https://jadensadventures.fandom.com/wiki/Cogsworth?oldid=235988"
Community content is available under CC-BY-SA unless otherwise noted.