Chewbacca (performed by the late Peter Mayhew) is Han Solo's Wookiee counterpart in the original Star Wars saga. Before he met Han Solo, Chewbacca assisted Yoda in the Battle of Kashyyyk during the Clone Wars. When the clone troopers betrayed the Jedi, Yoda killed the troopers and escaped with Chewbacca's help. After being saved by Han years later, Chewbacca swore a life debt to him and joined him on many adventures. Soon, they met Luke Skywalker and went on to help him defeat the Empire. 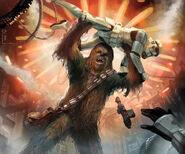 Add a photo to this gallery
Retrieved from "https://jadensadventures.fandom.com/wiki/Chewbacca?oldid=240495"
Community content is available under CC-BY-SA unless otherwise noted.