Start a Wiki
Orphaned and abandoned by a cruel uncle, Billy Batson (Voiced by Tara Strong) was forced to live on the streets of Fawcett City, making a living selling newspapers. One rainy night, a mysterious man dressed in black (the spirit of his father C.C.) approached Billy and convinced him to follow him down an abandoned subway station. Riding on an enchanted subway car with his mysterious host, Billy reached the Rock of Eternity, where he was greeted by the wizard Shazam. Shazam had chosen the boy to be his successor in the eternal war on evil, and gave Billy powers based on six mythological figures. To activate these powers, Billy must speak the wizard's name, and then, in a flash of magic lightning, he is transformed into the World's Mightiest Mortal, Captain Marvel (Voiced by Jeff Bennett)! As Shazam is really a kid, he displays many childish tendencies. For instance, as he is about to thank Batman for his help in fighting Blockbuster, he is distracted by the triceratops skeleton that he had told another kid about earlier in the episode. He quickly apologizes to Batman and runs off to see the exhibit.

Billy also felt the strong urge for a family, holding onto his mother's necklace as the most valued of all his possessions and desiring nothing more than a family. Billy also exhibits positive character traits, showing self-restraint by not using his powers against the bullies in his orphanage.

Back in the orphanage, Batman pays him a visit along with a surprise. Batman had done some research and found Billy's sister, a girl named Mary Batson, who had been adopted by the Broomfield's. Billy then leaves with his new family, happy at last.

Billy Batson uses the magic word SHAZAM to transform into Shazam and every letter of the word stands for a different power or ability.

If Shazam is hit by lightning in his super form, he immediately turns back into Billy.

Billy can also be prevented from turning into Captain Marvel if he is gagged or otherwise rendered unable to utter his magic word out loud.

While Billy has the physical form of an adult as Shazam, he still has the personality of a child his age, which may make him too trusting at times. 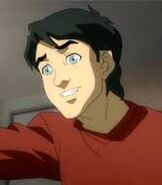 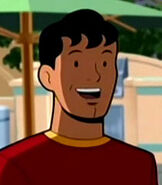 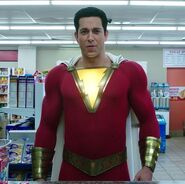 Retrieved from "https://jadensadventures.fandom.com/wiki/Captain_Marvel_(DC_Version)?oldid=250489"
Community content is available under CC-BY-SA unless otherwise noted.