"Who's up for a little first contact?"
―Carol Danvers

Carol Danvers (performed by Brie Larson) is a friend of Janet Van Dyne. She worked with Dr. Philip Lawson, until he was found out to be the Kree scientist also known as Captain Marvel. After encountering the Sentry-459, she was exposed to the cosmic energy that was flowing over Lawson. Carol was transferred to a hospital for recovery, where she discovered she had gained powers from her exposure of Captain Marvel's energy.

She later became Ms. Marvel and joined S.W.O.R.D. and later the Avengers.

Superhuman Strength: Ms. Marvel, thanks to her perfectly amalgamated alien Kree/Human physiology, is superhumanly strong to an unknown limit. Hawkeye implies that she is nearly as strong as the Hulk and as tough as Thor. Her strength can be augmented by absorption of various types of energy.

Superhuman Durability: Carol's skin, bones, and tissue are far denser and resistant to damage when compared to an ordinary human. Like her physical strength, Carol's maximum durability has been compared to her teammates Hulk and Thor, who ware both incredibly durable themselves. Her durability is increased by the fact that she is able to absorb energy, both by the fact that most energy based attacks are rendered ineffective, and because the absorption of said energy actually increases the amount of damage her body is capable of taking.

Flight: Carol is able to soar through the air at high speeds and with great maneuverability. Her top speed is unknown. Her flight speed could presumably be increased by the absorption of energy.

Energy Projection: Carol is able to project bursts of yellow energy from her hands as a form of ranged combat. These blasts can vary in power, depending on the amount of energy Carol has currently absorbed. It appears as though her body generates its own energy, since she is still able to utilize the blasts without having previously absorbed energy.

Energy Absorption: Carol is able to absorb various kinds of energy, such as the cosmic energy produced by Ronan's Universal Weapon. This energy serves to increase her other abilities, allowing her to become far stronger, take more damage, fly faster, and produce even more powerful energy blasts. This power also means that most energy attacks are rendered completely ineffective against Carol, leaving foes with such powers defenseless against her. If Carol attempts to absorb massive amounts of energy, it may overload her and cause her pain. When she is fully charged, Carol's body becomes a black silhouette and she glows brightly with yellow energy. The amount of energy she can absorb is unknown 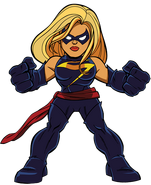 Retrieved from "https://jadensadventures.fandom.com/wiki/Captain_Marvel_(Carol_Danvers)?oldid=257612"
Community content is available under CC-BY-SA unless otherwise noted.