Captain America (also known as Steve Rogers) (performed by Chris Evans) is a legendary hero from the past and the leader of the Avengers.

In World War II, patriotic soldier Steve Rogers received the Super Soldier Serum and became the living symbol of freedom, Captain America. Left for dead while frozen in ice, the star-spangled hero with an indestructible shield awoke decades later to continue his never-ending battle for liberty.

Captain America's main weapon is a circular, concave shield that is made of a unique vibranium-iron alloy that is virtually indestructible. The shield can be thrown like a disc and then return to Captain America's hands by ricocheting off of objects. The shield was destroyed by the intense magical power of the Odin Force, and the Captain briefly used the shield belonging to the Goddess Sif as a replacement. The shield was eventually repaired by Wakandan scientists and remains as indestructible as it was before. Cap also briefly used the holographic shield wielded by his Skrull counterpart when infiltrating Ultron's lair.

Captain America also uses a motorcycle when he wishes to reach his destination faster than he is able to run.

From "The Super Hero Squad Show" as a Squadie 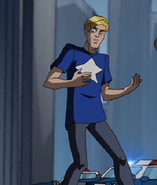 Add a photo to this gallery
Retrieved from "https://jadensadventures.fandom.com/wiki/Captain_America?oldid=253410"
Community content is available under CC-BY-SA unless otherwise noted.