Jaime Reyes (Voiced by Will Friedle) is a young teenager who was chosen to wield the scarab after the unfortunate death of Ted Kord, the previous Blue Beetle. The scarab bonded with his body, and even though Jaime had yet to fully control the scarab’s power, he started to fight crime as the Blue Beetle.

Jaime Reyes is shown as a big fan of Super Heroes and often discusses them with his friend Paco At some point it is revealed that Jaime's scarab is actually a piece of alien technology belonging to a group called the Reach.

The Scarab grants Jaime a large array of powers and weaponry. While originally lacking even the ability to turn into the Blue Beetle, he eventually gains better control over it. He has a variety of guns, melee weapons and the suit even grants him the ability to grow to a very muscular state.  The armor also grants Jaime enough strength to lift a small truck, and allows him to survive unaided in space. Jaime also has a large amount of willpower allowing him to be master of the scarab rather than the other way around.

It also revealed that the scarab has started talking to him and calls him goober, however, he simply calls the scarab armor 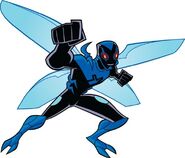 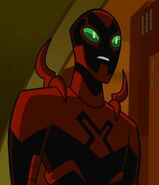 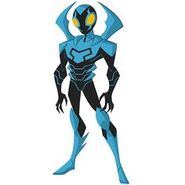 Blue Beetle in Justice League Action
Add a photo to this gallery
Retrieved from "https://jadensadventures.fandom.com/wiki/Blue_Beetle?oldid=251688"
Community content is available under CC-BY-SA unless otherwise noted.