Start a Wiki
Beast (performed by Kelsey Grammer) is a member of the X-Men. Though blessed with the agility and strength of a great ape, the blue-furred Dr. Henry McCoy's greatest asset is his keen scientific mind. He possesses a genius-level IQ, with extraordinary expertise in genetics, biochemistry and other subjects. He often acts as the voice of reason for Wolverine and the X-Men.

Genetic Atavism: powers of genetic atavism (or genetic traits that resurface in a species after many years of dormancy). He also possesses neotenous (or traits in a descendant that resemble those of an ancestor organism, like an ape trait in a human) characteristics, which would explain why he has a big modern brain with an ape-like physique. Due to secondary mutation Beast transformed from his original ape-like physique to a more cat-like physique. 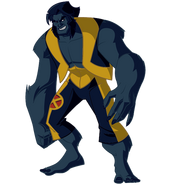 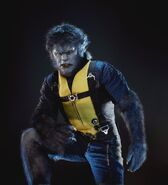 In "Marvel Disk Wars: The Avengers"
Add a photo to this gallery
Retrieved from "https://jadensadventures.fandom.com/wiki/Beast_(X-Men)?oldid=238602"
Community content is available under CC-BY-SA unless otherwise noted.