Arthur Pendragon (voiced by Robert Reitherman in the disney version, and Pierce Borsnan in the Warner Bros. version) is The King of England and the main Protagonist in The Sword in The Stone and King Arthur and the Kinghts of The Round Table, while a minor character in Quest for Camelot. He was born under the name of King Uther Pendragon, his father, and the Wizard Merlin, was his advisor. After he was born, Arthur was sent by Merlin to live with Sir Ector, and his son Kay. He lived with the two and trained to be a knight, along with Kay, and Merlin told Arthur about his parents. Eventually a challenge came to know who ever pulled the sword Excalibur from the stone would become king. Arthur eventually got his chance and pulled the sword from the stone, and was made king, and revealed to be Uther's son, and became King. When he became king, Arthur, decided to make Kay, his first Knight of The Round Table.

Arthur eventually met and fell in love with a woman named Gwenivere, and married her becoming Queen. He created Camelot as his castle, and eventually discovered the Holy Grail. However, Arthur soon gained new enemies, Morganna Le Fay, and his nephew, Mordred. Also an enemy with the fallen knight, Ruber. 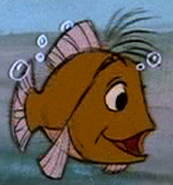 Arthur as a fish 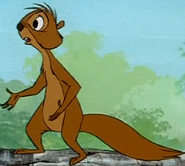 Arthur as a Squirel

Arthur as a bird

Arthur wielding Excalibur
Add a photo to this gallery

Retrieved from "https://jadensadventures.fandom.com/wiki/Arthur_Pendragon_(Disney_and_Waner_Bros.)?oldid=256263"
Community content is available under CC-BY-SA unless otherwise noted.