Start a Wiki
Scott Lang (performed by Paul Rudd) is the new and current Ant-Man/Giant Man, and a member of Heroes for Hire.

Scott Lang has a daughter named Cassandra. He used to work with Henry Hank Pym in college. When Cassandra got sick, he became a bank robber for a mob boss, Crossfire, to get the money needed for an operation to cure her. Cassandra became better, but Scott also had to go to jail for a while. Some time after his term ended, Cassandra got kidnapped by Crossfire. Scott needed to get more money to get his daughter back, so he stole Hank's Ant-Man suit so he could rob another bank. Hank tried to help him rescue Cassandra, but Scott refused. He then went to Crossfire's lair, where he gave Crossfire the money. Crossfire then switched up the deal at the last minute, saying he gets to keep Cassandra. Hank, Luke Cage, and Iron Fist then came to help Scott.

Hank shot Cassandra with Pym Particles, and Scott shrunk to get her to safety. He restored her size, then told her to stay in the janitor's closet while he went to beat Crossfire. Scott kicked him to the wall and made thousands of ants crawl on him, thus forcing Crossfire to surrender. Scott said to Hank that he would turn himself in and return the suit, but Hank said he could keep the suit, and Iron Fist asked if he needed a job while Cage was yelling at Pym of where he should send the bill. 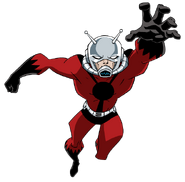 As the current Ant-Man in "Earth's Mightiest Heroes"

As Ant-Man in "Avengers Assemble"
Add a photo to this gallery
Retrieved from "https://jadensadventures.fandom.com/wiki/Ant_Man?oldid=221549"
Community content is available under CC-BY-SA unless otherwise noted.