"So you have come this far, and still you understand nothing. Every light must fade, every heart return to darkness!" -Ansem to Sora.

Ansem, the Seeker of Darkness (voiced by Billy Zane, and Richard Epcar in the sequels) is Xehanort's Heartless and the main antagonist of the first Kingdom Hearts game. He called himself "Ansem" after his former master, Ansem the Wise. This Ansem's goal was to spread the darkness and have it conquer all worlds. To do this, he used Maleficent and the other Disney villains to gather the seven Princesses of Heart to open the Keyhole to the Door to Darkness. He even tricked Riku into opening his heart to the darkness, allowing Ansem to take over his body. But his plan failed when Sora, Donald, and Goofy stopped him, and he was defeated by the light of Kingdom Hearts.

But because he took control of Riku, a small piece of Ansem still existed within him. Riku fought him in Castle Oblivion and was victorious.

Ansem with his Guardian 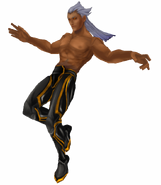 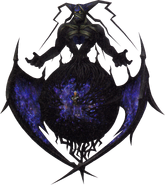 Ansem and his evolved Guardian

Ansem's demise.
Add a photo to this gallery

Retrieved from "https://jadensadventures.fandom.com/wiki/Ansem_the_Seeker_of_Darkness?oldid=257202"
Community content is available under CC-BY-SA unless otherwise noted.