Start a Wiki
Alone is young boy with a talent in painting beautiful pieces of artwork and the Leonardo Devinchi of the team. One day when picturing in his mind for one of his painting, which he then made, a wondorus thing happened, the scene from the painting came to life, what's more whatever he made became real. It wasn't until later on in his life that he was in fact the reincarnation of Zeus, Ruler of the Gods, and Master of the thunder bolts, from then on he became a great help to his friends and family. In the legend of Zeus, He was one of the only children of six to have survived his father's wrath. His father, Kronos, is the leader of the Titans. He eventually freed his siblings with a drug, and caused his father to regergatae them, freeing his siblings, and they battle with him. Later, Zeus went into Tarterus, to gain the allies, known as the Cyclops Titan, and the hundred handers. After freeing them, and gaining there trust he is granted the Lightning Bolt. Soon, war begins, victory was near  until the Titans called forth Typhon. The two clashed, until Zeus emerged victorious. 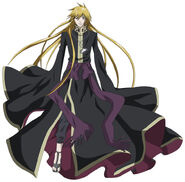 Alone all grown up

Retrieved from "https://jadensadventures.fandom.com/wiki/Alone?oldid=177135"
Community content is available under CC-BY-SA unless otherwise noted.