"Even if I won the duel, I could never turn those two in. This Academy is a lot more fun with them, than without." - Alexis thinking about having more excitement with Jaden with her at the Academy.

Alexis Rhodes Yuki (voiced Priscilla Everett, later Emlyn Morinelli McFarland) is a main character in Yu-Gi-Oh! GX and in Jaden's Adventure series. She is a strong, beautiful female Duelist from Obelisk Blue dormitory at Duel Academy as well as one of Jaden's closest friends. She duels with a "Cyber Girl" Deck consisting of female warrior type monsters based on sports. She is titled the "Queen of Obelisk Blue."

Unlike most other Obelisk Blue students, she did not think she was better than other students. A lot of guys were interested in her, but she had her eyes on Jaden.

During her first year at Duel Academy, Jaden dueled her and beat her, starting her to fall in love for Jaden. She was one of seven to defeat the Shadow Riders from obtaining the Sacred Beast cards. She also found her long lost brother, Atticus, after Jaden defeated him as Nightshroud. During her second year, she became of a victim of the evil Society of Light, and was brainwashed and became a member. But Jaden freed her from their power. And during her third year, she traveled with Jaden to the alternate dimension to look for Jesse, but became concerned for Jaden when he became obsessed with searching for Jesse. After Jaden's duel with Zure, Alexis, Chazz, Hassleberry and Atticus became marked with a wicked rune which responded to the emotion they expressed. Alexis was sadness. Alexis and the others were captured by Brron and sent to the stars after being sacrificed during Jaden's duel with Brron. She became one of Yubel's prisoners, but was freed after Jaden combined his spirit with Yubel's.

After returning to Duel Academy, Alexis was heartbroken thinking that she would never see Jaden again. But after he mysteriously returned, she was so happy that she confessed her love for him, and they both became a couple. Now, she goes with Jaden on his adventures as the second-in-command of the team (next to Beetles and Jesse). Later on in the series, Alexis and Jaden will be married. 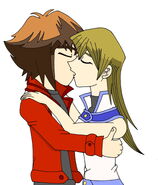 Alexis as she appears in Yu-Gi-Oh! ARC-V
Add a photo to this gallery
Retrieved from "https://jadensadventures.fandom.com/wiki/Alexis_Rhodes?oldid=259326"
Community content is available under CC-BY-SA unless otherwise noted.