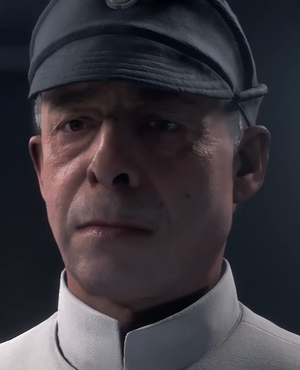 Garrick Versio (portrayed through motion capture by Anthony Skorrdi) was an Admiral in the Imperial Security Bureau, a secret police and loyalty organization affiliated with the Galactic Empire. He began his career in the Imperial Military by bringing his homeward Vardos and the rest of its star system into the Empire.

Retrieved from "https://jadensadventures.fandom.com/wiki/Admiral_Garrick_Versio?oldid=228772"
Community content is available under CC-BY-SA unless otherwise noted.