Start a Wiki
"So, the Rainbooms want to turn this into a real Battle of the Bands? Then let's battle!" - Adagio with Aria and Sonata preparing strike the Rainbooms.

Adagio Dazzle (voiced by Kazumi Evans) is the main antagonist in the special My Little Pony Equestria Girls: Rainbow Rocks. She is a female siren who is the lead Singer of her band the Dazzlings, rivaling the Rainbooms.

Adagio Dazzle, along with Aria Blaze and Sonata Dusk, are the three sirens of Equestria, and the daughters of Eris and Pitch Black. They gained negative energy from all the ponies and caused hatred and distrust to take over Equestria, until Star Swirl banished them to another world for all eternity. In the human world, the Dazzlings gained their revenge and joined the league of evil; The Heylin Empire. There Adagio met Venom, where their love have gained ultimate power of evil and darkness. During at the restaurant with Aria, Sonata and Venom, she found the magic that comes from Canterlot High School, while hearing Venom's father, Chase Young, is dead, she grew with her sinister dark plan to get it. Before the song with gaining students of CHS' negative energy, she and Venom brought their fellow villains helping them to take over the school, and then Equestria. She is then interested Twilight and the Rainbooms for their magic within them, therefore, she orders her several Heylin warriors to get them for her, but failed. As Battle of the Bands beings, she blackmailed Kyle Akers that if he wouldn't quit from the band, she would tell them that she and Kyle are brother and sister, but later on it all backfired. She even tricked Rigby with soul ball made by pure darkness with her to fool him that she and her Heylin Warriors could easily find and capture the Rainbooms. After the Rainbooms and Team Owl got trapped and sealed to the kingdom of Heylin Empire, she and her villains finally steal Twilight's magic until the rest, and reveals her and others that she is one of the 13th Seekers of Darkness, trained by an evil Keyblade Master, Master Xehanahort, and the Egyptian God of Chaos who also happens to be her master, Set. After stealing Twilight and her friends' magic, she and her army gained their ultimate Heylin power of darkness to conquer Equestria, and then the world, plunging the world into 10,000 Years of Darkness. Attempt to kill Twilight, Kyle and their friends, she and her sisters uses their dark Heylin magic to transform into their siren forms, and almost gaining their victory. But they, their pendants and their Heylin army are defeated when Sunset Shimmer joined the Rainbooms and Team Owl to wield her newest element of harmony, Redemption, and together, heroes created Rainbooms Alicorn within the Magic of Friendship against them. After the Dazzlings' defeat, Adagio will return for revenge on the Rainbooms. 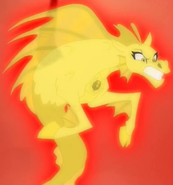 Retrieved from "https://jadensadventures.fandom.com/wiki/Adagio_Dazzle?oldid=252979"
Community content is available under CC-BY-SA unless otherwise noted.