"I AM BETTER THAN YOU AT ALL!" ―Abomination Emil Blonsky (performed by Tim Roth) was special force operative trained by the British SAS. Now known as the Abomination, he is a former member of the Masters of Evil.

The gamma radiation that mutated the Abomination's body fortified his cellular structure and added, from some as yet unknown source, over 2000 pounds of bone marrow and tissue to his body. Unlike the Hulk's, the Abomination's transformation has proved stable; he cannot change back and forth between his human state and his superhuman state. 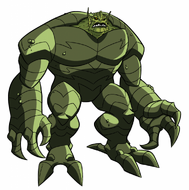 As Doom's henchmen in "The Super Hero Squad Show"